Back to Cruisin 605
Back to Tom's Page 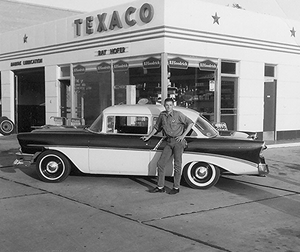 The Chevrolet Racing Team was a loosely organized car club that was active in Sioiux Falls from the mid-1960's into the early 1970's.  There were no meetings, no dues, and no rules; it was just a group of Chevy lovers that enjoyed getting together to work on their cars, "bench race', and go to the drag races.  Their unofficial meeting place was Park Ridge Texaco, on the southeast corner of 26th Street and Western Avenue.  Robert Williams owned the station for several years, and his main employee, Daryl VanderPloeg was a "charter" member of the Chevy Racing Team.  Randy Williams, Robert's son (seen to the right) was a younger member of the team and its lead promoter. (At the time of this photo, in 1965, Randy's dad had sold the station to Ray Hofer.)  Randy owned this nice '56 Chevy early on, and later owned a '61 Chevy Impala, prior to entering the US Army in 1966.  Sadly, Randy was killed in Viet Nam in 1968.  By the early '70's, the Chevy Racing Team sort of faded away as guys moved, began raising families, or pursued other interests.  It is hoped you will enjoy this look back at a simpler time when today's classic cars were commonplace. 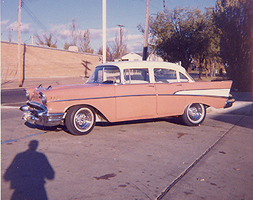 Here's Jim Witkop's 64 Chevy Impala at Park Ridge Texaco in 1964. Jim bought this 400hp, 409 ci car for racing and only ran it one season. Glen Walker from GPSR owned it later. 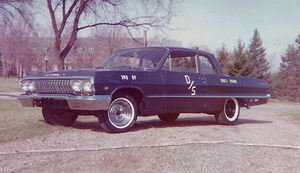 Daryl VanderPloeg bought this 300hp/327ci 63 Chevy Bel Air from the original owner. After Daryl raced it for a couple seasons, several others enjoyed this car, including Tom Olsen. 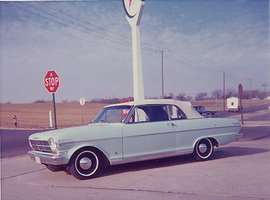 GPSR members Bill and Lana Kullander owned this 62 Chevy II as newlyweds. Bill raced the car regularly; here it is in 1964 at Park Ridge Texaco, 26th and Western. 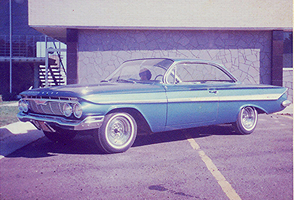 Chevy Racing Team member Dave Thompson's beautiful 61 Chevy parked at the Minnehaha County Courthouse. This Chevy had the 348 engine and a 4-speed. 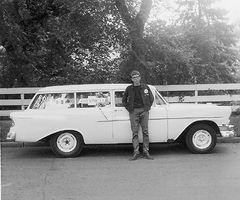 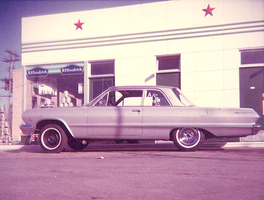 Ken Noreen bought this 425hp/409ci 63 Chevy new; it's still in the area and has been restored to perfection by the current owner. (Rumors abound that this car had a rare aluminum front end at one time...who really knows?) 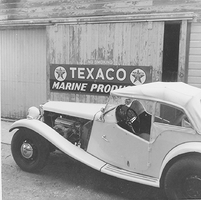 Glen Christensen owned this pale yellow 53 MG with a Corvette 283 engine. The car was a pretty wild ride for 1964; under hard acceleration the frame would flex, and you never knew for sure what direction it was going to go! 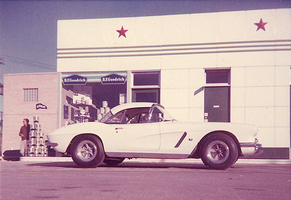 Denny Robinson's 62 Corvette at Park Ridge Texaco. This was a particularly quick Corvette with a high performance 327 engine and a 4 speed.(1963) 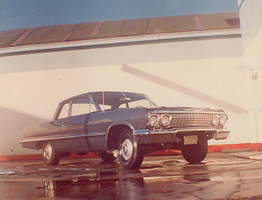 "Sleeper Mode" describes this look on Tom Olsen's 63 Chevy Bel Air in 1966. This 327 powered sedan was a street terror; the full hub caps fooled a few drivers that assumed this was just another docile "grocery getter" sedan. 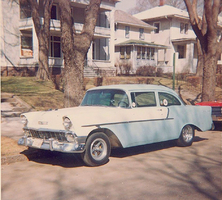 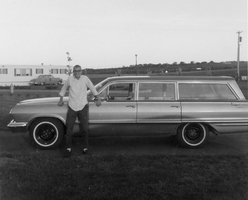 Steve Selvig's dad owned this saddle tan 327 powered 63 Chevy wagon. Steve would regularly tow Chevy Racing Team members to the drag races, pop off the hub caps, and go on to win his class at the races as well! 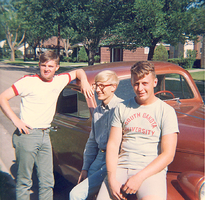 Here's 3 Chevy Racing Team members hanging out in 1967. Randy Williams, Steve Selvig, and Dave Thorson (L-R) with Dave's 38 Chevy coupe. Dave was in the Marines at this time, and Randy in the Army; Randy was killed in Viet Nam several months later. 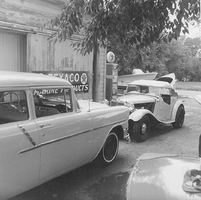 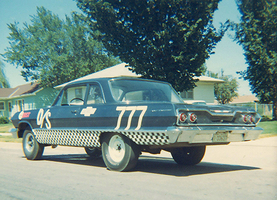 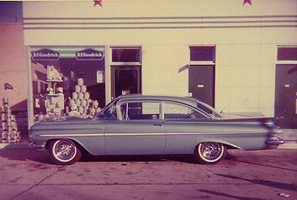 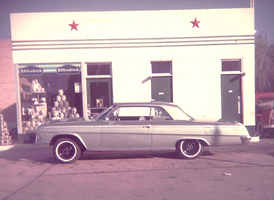 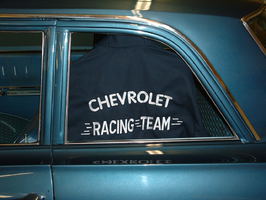 A Chevrolet Racing Team jacket not-so-discretely hung in a side window put folks on notice. 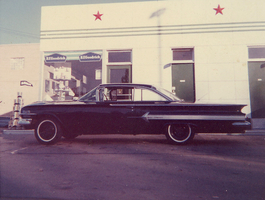 This sharp 1960 Chevy Impala was owned by Daryl VanderPloeg; it was powered by the 348 engine with a 4-speed. Daryl worked at Park Ridge Texaco where this photo was taken in 1963. 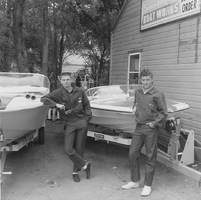 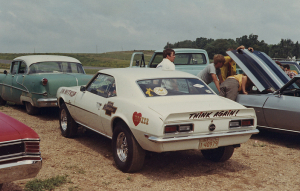 Team member Jim Witkop raced this sharp 1968 RS/SS Camaro in 1969. Jim went with a 350 engine in this one instead of the popular 396 big block. This photo is at Thunder Valley Dragways. 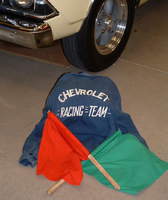 Some Chevy Racing Team members kept their jacket and a pair of "starter flags" in their car at all times. It's rumored that an occasional drag race was started on remote highways with flags such as these back in the '60's. 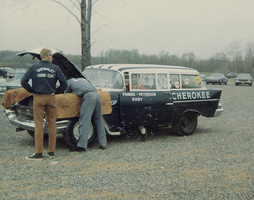 Chevrolet Racing Team members travelled the country a bit. While in the Army and stationed in New Jersey, Tom Olsen checks out this 57 Chevy wagon at the drag races in Englishtown, NJ.(1967) 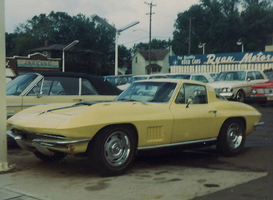 Team member Howard Goering owned too many Corvettes to recall; he went on to own Howards Corvettes, a local business specializing in Corvette restoration and sales. Here's a 1967 427 powered cooupe he owned briefly in 1967. 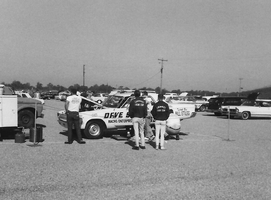 In 1965, Team members Randy Williams, Glenn Christensen, and Tom Olsen treated themselves to a trip to the National Drags, in Indianapolis, IN. Here's Randy and Glenn checking out Dave Strickler's Dodge. 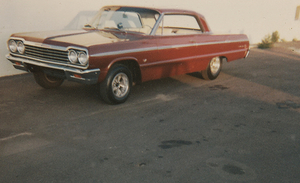 Les Ramsted owned this sharp 1964 Chevy Impala in Honrouras Maroon, with the white interior. This car had the 300hp/327ci engine with a 4-speed and was competitive in D/Stock. (1964) 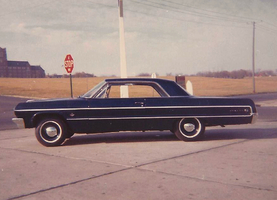 This Daytona Blue 1964 Impala was owned by Jerry Anderson. This car had the 400hp/409ci engine with a 4-speed transmission. The "baby moon" hubcaps on the car were a popular dress-up item in the early-mid '60's. 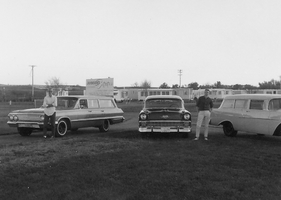 In 1964, Steve Selvig and Randy Williams pose with their cars at the new Johnson's Estates trailer court. Tom Olsen's Chevy wagon is to the right.